Reception for the Les Dames d’Escoffier International Board

The weather was perfect, the food was fabulous, and the fellowship was sincere at the reception for the LDEI Board members that our chapter held on Saturday, July 15, 2017, at Coquette Patisserie. Host and owner Dame Britt-Marie Culey outdid herself, with a three-course, alfresco buffet dinner that kicked off with raw oysters, pâté, rillettes and more, moved on to a variety of savory pastries and cheeses, and concluded with an array of sweets including her rightfully famous macarons.

Representing our chapter were Shara Bohach, Elaine Cicora, Crickett Karson, Beth Davis-Noragon, Britt-Marie Culey, and co-presidents Cynthia Eakin and Marty Nagele. Doing double duty as both second vice president of the International Board and a founding member of the Cleveland chapter was Dame Bev Shaffer. And spouses Eric Eakin, Brad Albing and Bob Bohach added some gusto to our gathering.

Board members were provided with Cleveland-themed goody bags (aka reusable Heinen’s shopping bags) filled with items donated by our members: Ohio maple syrup; Lilly Handmade Chocolates; Storehouse Tea; Bertman Original Mustard; “I liked Cleveland before it was cool” koozies; copies of Edible Cleveland and the Scene; an array of maps and guides from Destination Cleveland; and flyers for SummerDine.

Lubricated by French 75s and Pimm’s Cups on the patio, conversation was lively, as befitting a group of food and hospitality pros who hailed from as far away as Honolulu and as nearby as Shaker Heights. Seated at shaded picnic tables, this co-mingled group of chefs; culinary consultants; sales, marketing and PR pros; cookbook editors; dining editors; and food writers touched on topics ranging from the virtues of Maine blueberries to the state of the Chicago dining scene, and from the proper way to drink mescal to the quality of West Coast oysters. By the end of the evening, many new friendships had been forged and valuable contacts made. And in the process, our chapter had a chance to show off our city to a suitably impressed group of colleagues. 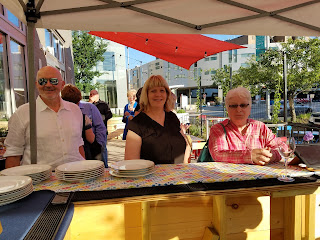 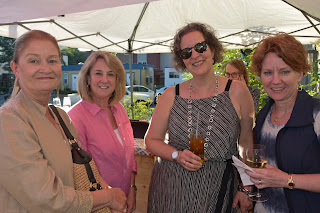 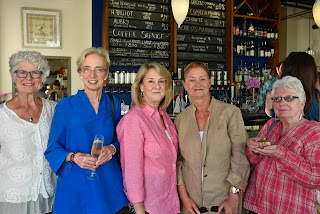 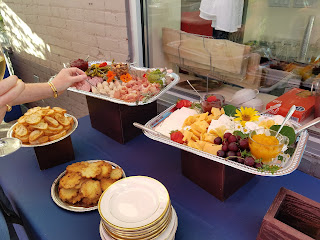 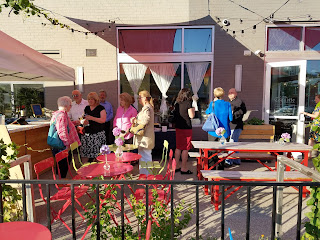