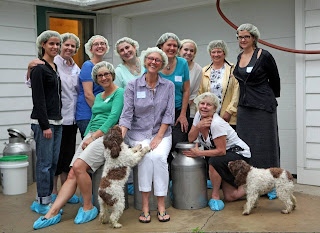 On July 22, 2013, Cleveland Dames and guests met at Mackenzie Creamery for a tour, tasting, and chapter meeting. The evening began with a meeting in Dame Jean Mackenzie's beautiful farmstead home. While enjoying the fresh buffet of appetizers and wine that members brought, we were treated to some history of how Jean found the property, added to the home while maintaining the wonderful farmhouse architecture and design, and started her creamery business.

We then visited the creamery, amid the beautiful, expansive country setting. We donned the requisite hairnets and booties, and camped it up for photos taken by Dame Beth Segal. Jean shared the history, challenges, successes, and future of Mackenzie Creamery with us. We saw the equipment, the packaging area, and the already-spoken-for product ready to ship from the cooler. Having tried several cheeses on the appetizer buffet, including the delightful Apricot-Ginger, we tried some fresh Ricotta in the creamery, which had so much more flavor than the regular Ricotta you find in stores. Delish!

Next, it was on to visit the goats. Four goats live at Mackenzie Creamery, but they are moreso Jean's pets than goats that provide the milk for the cheese. Actually, they proudly purchase their milk from two local goat dairies.

We had planned a hayride for the end of the evening, but the rain had other plans. So we called it an evening after visiting with the goats. It really was another great evening with good friends, great food and wine, and a wonderful education on goat cheese. Thank you Dame Jean! 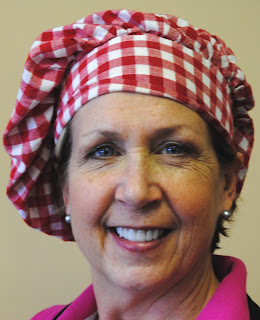 As owner of the highly popular Frickaccio’s Pizza Market, Terry Frick enjoys hard-earned success with not one, but two locations: at the West Side Market (Stand A8) and in Fairview Park. And although her original, world-famous pizza bagel has garnered plenty of national recognition and even attracted presidential attention (her stand was asked to be the only food vendor for President Obama’s most recent visit to Cleveland), what she’s most proud of is her certified organic dough balls.

In the food business for nine years, Terry says it was mostly her family who influenced her early love of food. “Pork chops on the grill remind me most of my mom,” says Terry. “But my earliest memory of food was, believe it or not, lobster!”

When she entertains now, Terry likes to create new menus and food for friends. As for her go-to, quick-and-easy dinner? “Chicken breast and veggie sides,” she shares.

Her favorite restaurant?  Wild Mango, where she frequently orders the Shrimp with Spinach.

And when it comes to her favorite global destination, Terry doesn’t even hesitate. “Paris!” she replies. “I love everything about it!”

Terry says she learned of LDEI through a member. What does she enjoy most about her membership? “I really enjoy supporting and helping people to grow a business,” she exclaims.

Learn more about Terry as she shares some fun and interesting insights about herself.

Which one chef would you want to invite over for dinner and what would you serve? Chef Gordon Ramsey. Linguine with clam sauce.

What is your favorite cookbook? Gourmet magazine’s annual “Best of” hardcovers.

What is your favorite comfort food? Meatloaf.

Do you have a signature dish? Linguine with clam sauce.

What’s the biggest cooking mistake you’ve ever made? Figuring out that a clove of garlic is not a bulb!

What would people be surprised to find in your kitchen? A smoker.
Posted by Unity Design at 1:15 PM 0 comments