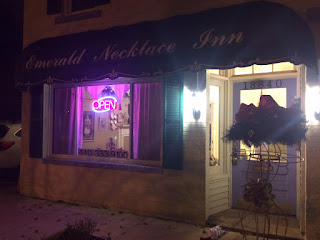 On Monday, Nov. 30, 2015, Dame and Chapter Historian Gloria Cipri Kemer welcomed more than 15 members to her charming Emerald Necklace Inn’s Tea Room. Overlooking the Rocky River Reservation, the Inn is located in Fairview Park and was built in 1863 during the Civil War. It originally operated as the area’s first County General Store and now functions as one of the area’s most loved bed and breakfast establishments.

After arriving, Dames enjoyed a Pear Ginger Apple Cider with rum, an orange slice and orange sugar rim. Two varieties of Deviled Eggs and Liver Pâté with crackers proved to be a delicious accompaniment and tasty beginning to the evening. A savory Tomato Vegetable Rice Soup with Smokey Lapsang Tea Spice was served as the meeting was brought to order.

Treasurer Beth Davis Noragon provided an overview on the Chapter’s financials, and a motion to approve the report was accepted.

Following was Dame Terry Frick with an update on the Les Dames D’Escoffier National Conference in Charleston, S.C., from Oct. 29-Nov. 1, 2015. Terry discussed how inspired she was by all the talented women from LDEI’s 36 chapters and felt strengthened by plethora of incredible women in the food industry. She encouraged members to continue to support the presence of women in Cleveland’s food industry.

Chapter President Carol Hacker provided an update on conference scholarships and announced that two scholarships would be awarded for the 2016 conference, which will be held in Washington, D.C. Carol is graciously donating her President's stipend for another member to attend. Declaring 2016 as the “Year of Membership,” Carol’s goal is to add 10 new members.

Shara Bohach, Communications Chair, shared a postcard she designed that Dames can use to give to potential members or those who are interested in learning more about LDEI.

Grants and Scholarship Chair Jennifer Brush gave a quick overview on the Chapter’s streamlined grants application process and asked members what else we can do to improve. Dames discussed the possibility of identifying two to three non-profits and inviting them to a future LDEI meeting to give a brief presentation on what they do.

Dames were then treated to an intriguing presentation from Annie Denton with Red Cedar Coffee Company, located in Berea. Annie discussed her family’s business and rich history in coffee bean sourcing and roasting. She will be traveling to Costa Rica in February to source the beans for Red Cedar’s future specialty coffee blends. 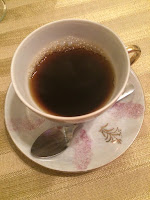 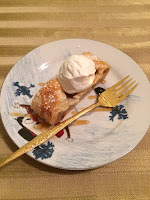 As the meeting came to an end, members enjoyed homemade apple strudel topped with whipping cream and a complimentary 2-ounce bag of Red Cedar coffee.

The Cleveland Chapter’s next Les Dames d’Escoffier meeting will be held on Jan. 11, 2016 at Green City Growers.
Posted by Unity Design at 10:15 AM 0 comments