The Wonderful World of Balsamics

at The Olive and The Grape in Mentor Ohio
By Cynthia Schuster-Eakin, with additions by Shara Bohach

Cleveland Dames discovered “The Wonderful World of Balsamics” at their March membership meeting, hosted by Dame Candice Berthold, owner of The Olive and The Grape.

Berthold led Northeast Ohio chapter members on a tour of the flavored balsamics she sells at her shops in Mentor, Kamm’s Corner and in the West Side Market. The hour-long tasting and class at the Mentor location began with an appetizer of assorted olives and peppers marinated in The Olive and The Grape’s Liquid Gold aged balsamic vinegar.

Recently accredited as a Certified Health Coach, Candice Berthold, CHC, AADP, engaged members in a discussion about the health benefits of balsamics and olive oils, and cautioned members about inferior products found at the grocery store. This transpired into a lively discussion about the worst toxic GMO foods we consume, and what we should all try to avoid.

Guest Ilona Simon, owner of Budapest Blonde Cocktail Mixes, concocted a “Balsama-Mama” mocktail flavored with bergamot orange lime barrel-aged balsamic vinegar to accompany the meal. Members noted how her mix was so much less sweet than the usual cocktail mixes. This is because her ingredients are not chemical-laden, and have a significantly lower sodium, sugar and calorie count per serving. They were delish!

Cleveland Dames ended the meeting by browsing the shelves at The Olive and The Grape, selecting one-of-a-kind products to take home to flavor their own recipes.
Posted by Unity Design at 12:21 PM 0 comments 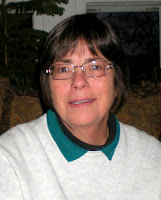 When Carol Hacker was just a little girl, she got her very first Easy-Bake Oven. The moment she first tried the oven out was when she decided, right then and there, what she wanted more than anything else in the world was to work in the Betty Crocker kitchens. Don’t laugh. She was so serious that she had her mother take her to the bank the very next day and open her first bank account in order to save money for the airfare to go tour their kitchens.

Even though Carol never did get to work for Betty Crocker Kitchens in Golden Valley, Minnesota, she did make food her life’s work. After obtaining a bachelor’s degree in science, Carol worked in a number of food-related positions. The most rewarding accomplishment during her 35-year tenure? “Turning around Kerr’s TK and Consumer Affairs Department and making it professional with at least a four-fold increase in accomplishment and productivity,” she says with pride.

As a freelance home economist – and the Cleveland chapter’s current Vice President, Carol still continues to enjoy all things food.

“My earliest childhood memory of food is eating prime rib bones in the backyard,” says Carol. “Then again, my grandma’s Hungarian cooking and my mom’s macaroni and cheese were to-die-for as well!”

Today, when it comes to entertaining, Carol likes to host sit-down dinners instead. “I have to use all my mother’s china and sterling – but in a casual atmosphere,” she explains.

And if she could invite only one chef over for dinner, who would it be? “Definitely Julia Child,” admits Carol. “Because I think she would be fun. But I would really have to have it catered!” she adds with a laugh.

How did Carol first hear of Les Dames? “From Laura Taxel and IACP in 2006,” she explains. “I joined that summer.” She goes on to add, “Meeting and becoming friends with a great group of accomplished women is what I have enjoyed most about being a member of LDEI.”

Learn more about Carol as she shares some fun and interesting insights about herself.

What’s the most unusual thing you’ve ever eaten?
Pig testicles. I used to can them and send them to my boss when I was really ticked off!

What is your favorite cookbook? Joy of Cooking – the older version.

What’s the biggest cooking mistake you’ve ever made?
Probably not the biggest, but early on, one mistake that stands out is when I used two heads of garlic in a recipe that called for two cloves of garlic!

What’s one ingredient you can’t live without? Salt.

Name 3 things that are always in your refrigerator? Wine, half-and-half, and diet pop.

Name 3 kitchen gadgets you can’t live without.
Rubber spatula, can opener, and a sharp chef’s knife.